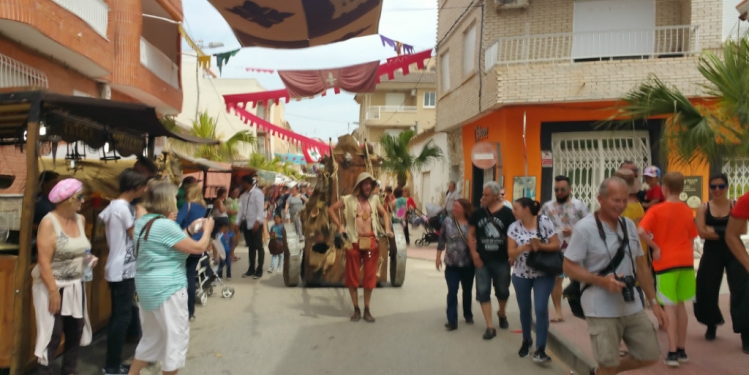 Summer Fiestas on the Costa Blanca.

Summer is now upon us and it is also time to enjoy Spain‘s festivals. Spanish fiestas symbolise the very essence of Spain and the Spanish people. They're colourful, vibrant, usually extremely noisy, often chaotic and always great fun.

The origins of many of the country's countless fiestas lie in religious feasts, often honouring a patron saint. Regardless of what day it is on the Costa Blanca there will be a fiesta either at a local, regional or national level, to celebrate and join in with. The nature of each fiesta depends on its origin. Some involve serious, even mournful religious processions but most are accompanied by parades with music and traditional costumes. These are ornately decorated and worn with pride to keep ancient customs alive.

Fireworks and firecrackers also play a big part in Spanish fiestas. These loud and colourful events are often accompanied by copious amounts of authentic food and drinks such as sangria and huge paella.

Each town on the Costa Blanca will celebrate Moros y Cristianos - Moors and Christians during July and August. This dates back to the centuries of Moorish domination which made a major impact on the country's culture, cuisine, language and traditions. Nowadays locals dress as either Moors or Christians for the occasion and re-enact battles. If you are interested in taking part in the fiestas, contact the town’s tourist information centre.

Below are a few of the many fiestas held on the Costa Blanca area:

Virgen del Carmen (The Blessed Virgin Mary of Mount Carmel) held on 16 July in Alicante, is a maritime fiesta with events, including decorated fishing boats, parades of sailors, and celebrations on the nearby island of Tabarca.

The patron saint festivities in honour of Santiago Apóstol are celebrated on July 25 in Benijófar. This festival starts the previous Sunday, with the offerings of flowers and the coronation of Queen and Ladies-in-waiting of the Holidays. During the week there are celebrations involving parades, dancing and musical performances.

The Mystery Play of Elx, or Elche, held every year on 14 and 15 August, is one of Spain’s oldest and greatest cultural events. The town of Elche hosts the production of a medieval play in honour of the Virgin of the Assumption. The play narrates the story of Mary’s body being elevated to heaven and has been proclaimed as a Masterpiece of the Oral and Intangible Heritage of Humanity by UNESCO. The play is divided into two acts over the two days, and is performed in the afternoons inside the Basilica of Santa Maria. On the second day there is a large procession where a statue representing the Holy Virgin is carried through the beautiful streets of Elche, surrounded by a sea of people.

There is also Carnival in Torrevieja, usually in February. A colourful spectacle not to be missed...

The Spanish are passionate about their fiestas, so wherever you go, you can be assured of a very colourful and exotic experience.

See below to view a selection of our bargain properties on the Costa Blanca.