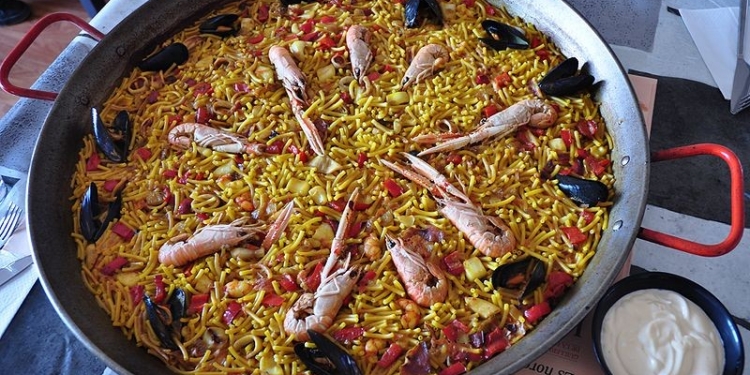 The fideuá is another typical dish that is made in Valencia paella (in the same pan in which paella recipe is made). This is a noodle dish with seafood. You could say that this is a seafood paella with noodles instead of rice. The fideua was invented in the coastal city Gandia. Legend has it that some fishermen from Gandia wanted to make a seafood paella on their boat but they forgot the rice. This is a delicious dish without meat.

1kg of mixed white fish and fish bones for stock

½ glass of dry white wine (this is optional)

0,2g of Natural toasted Saffron or a sprinkle of dried saffron powder

(If you are not up for making your own stock you can buy Fish broth from the supermarket.)

Fry the 300g of uncooked prawns (don’t remove anything from these prawns as they only contribute to the stock) in a deep source pan with the extra virgin olive oil until they are well cooked and the oil takes on a rich colour, be careful not to burn them, but squash the heads with a fork as you are cooking them, this will help release all the flavour. Now fill the pan with water and put in the rest of the ingredients, adding the wine once the stock is boiling and simmer for two and a half hours. Scoop off the foam that rises to the surface of the stock during the first half hour until no more appears, season with salt if necessary, and then once finished pass the stock through a fine sieve twice and put to one side.

Add some olive oil to the paella pan or frying pan and fry all the seafood except the squid. Once browned, remove from the pan and put to one side. Add the diced onions and fry for a couple of minutes, add the grated tomato and fry for about 8-10 minutes until it starts to take a thicker consistency (the water has evaporated from the tomato), add the squid to the pan and cook for a few minutes, mix altogether and in the pan and make a small opening in the centre of the pan, there should be some olive oil in the middle, if not add a small dash of oil, let it heat up and pop in the paprika, move it very quickly with a spatula so it doesn’t stick for about 30 seconds then add a large soup ladle of hot stock and stir in, the stock must be very hot before adding it, so the paprika doesn’t burn.

Add the 500g of Fideuá pasta (or small elbow macaroni or short noodles) stir in and spread the pasta around the pan. From this point onwards all you have to do is once the stock has almost evaporated, add another ladle or two of stock, move it all around with a large spoon and let it almost evaporate and then do it again. Keep doing this until the pasta is cooked and ready to eat. Add the stock little by little. When the pasta is almost cooked put the seafood back in and spread over the top of the pasta. Once the pasta is ready you want it to be left with hardly any stock, wet and moist, not liquid stock, don’t let it dry out completely though. When you remove it from the heat and let it sit for a couple minutes the final stock left over will reduce a little further and thicken as it cools slightly.

Thank you to www.eyeonspain.com for this recipe.