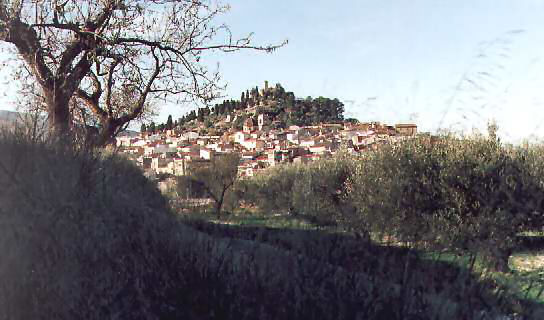 Castello de Rugat is located in the North of Benicadell Mountains. A great majority of the district are dedicated to agriculture, the other part are gullies and mountain ranges. The highest hills are La Lloma de L'ullastre, Peña Blanca and Algebasó,

The town is situated at the side of L'Ermita hill over 320 meters high. The Benicadell Mountains separate its district from the Cocentaina County. At the North, West and East there is the plane with many gullies and ravines.

The Moors occupied this region from the 8th to the 13th Century before being defeated by the Christian king Jaime I of Aragon. After the conquest the region became part of the Rugat Baron properties given to Lord Bellvis until 1499, in which were bought by the Duke of Gandia.

Place of Interest around Castello de Rugat include:

Ermita de San Antonio an ancient hermitage dedicated to Saint Anthony and Saint Barbara. It was built during the 17th century and rebuilt between 1985 and 1989.

Iglesia de la Asuncion - Inside there are three naves with barrel vaults and transept. In the intersection of the main nave and transept there's the dome. Behind the high altar there is the tabernacle chapel.

The mosque – Mezquita - located in the ancient town centre is one of the few mosques from the Spanish Muslim era.