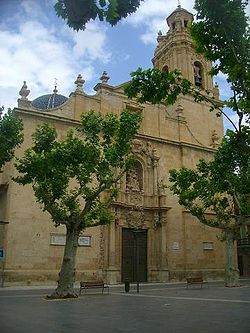 Aspe is a county in the province of Alicante, in the region of the Middle Vinalopó, of Valencia, Spain. The town is located in the valley of the river Vinalopó, 25 km from Alicante. The town itself still has a large percentage of Spanish inhabitants and is largely unaffected by the mass development that has taken hold of many of its surrounding towns, particularly those on the coast.

The first human settlement in the area around Aspe goes back to the Paleolithic Era, remains were found in the Peñón de la Ofra; Cueva del Rollo (Rock of Ofra; Cave Roll or the Sun). Further evidence during the Neolithic Era (Tabayá, Murón de la Horna), the Iberians named the town 'Aspis' and their settlement was in the area of Castillo del Rio. Next came the Romans who re-named the town 'Laspis' and founded the town in its current location and began to develop agriculture in the area.

More important developments came for Aspe during the Arab occupation in the seventh century when an intricate system of irrigation was put in place to bring water to previously dry areas of land. Aspe was created as a village in 1296, following the expulsion of the Moors at the beginning of the seventeenth century, and the village was repopulated by Aragonese and Spanish became the major tongue.

Aspe is easily identifiable from any approach road due to the vineyards growing the Aledo bagged grapes which are to be found in many Spanish homes on New Year’s Eve. It is predominantly agricultural and its main industry is the grape and wine production, which is renowned throughout Spain and has achieved national status.

The town centre (Plaza del Ayuntamiento) is a great place to stroll around. There is the Parish Church, dedicated to Nuestra Senora del Socorro and although building began in the seventeenth century the church was not completed until early in the eighteenth century. The eighteenth century Ayuntamiento (Town Hall) stands on the other side, and there is also the twentieth century modernist casino. This is the hub of the town and has now been pedestrianised.

This Spanish town has a wealth of shops and restaurants. The new buildings blends effortlessly with the older style Spanish houses, and the main road through Aspe is beautifully lined with trees.

The shield of the city sums up his story, a crowned shield with three towers representing the three castles of the town: The Castle of Rio, Aljau Castle and the Castle of Calvary. Letters A and S on red poppies field a P on mountain and Tarafa River, a tributary of Vinalopó.

See below to view a selection of our bargain properties in Aspe.