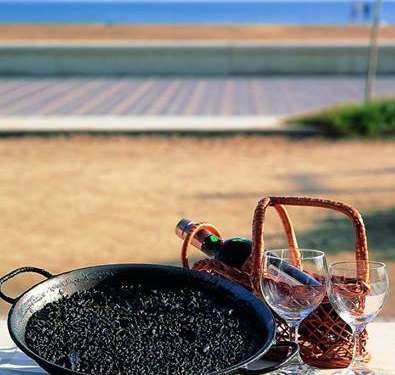 Arroz negro is a dish closely related to paella and arroz a banda as it uses seafood products as ingredients, but it has its own special flavours and appearance which makes it very characteristic, though similar preparation methods and paella dish are used.

What gives arroz negro its appearance is natural squid ink. This also gives the dish its name. Hence this dish is called 'black rice' as it is black in colour. If you are planning on making this dish at home, there are two main ways of getting squid ink. The first is to buy some fresh squid and extract the ink from them. However, this may be a little fiddly. Therefore there are some specialist shops that will sell squid inks in jars which will take out the hassle for you.

Arroz negro is originally from Castellon in Valencia and Catalonia. In Tarragona there's an important arroz negro tradition too. In fact the dish is commonly found in many of the coastal regions of Spain. Just like many other dishes its preparation has historically depended on the available ingredients, so it's not an exact science, although traditionally seafood such as squid and it's ink, cuttlefish and shrimp are used, and vegetables such as onion, and garlic.

Arroz negro is often served with the Spanish garlic mayonnaise sauce, alioli, just like a lot of the rice dishes to be found here on Spanish food. The garlic in the sauce goes well with the garlic rice and keeps the dish moist.